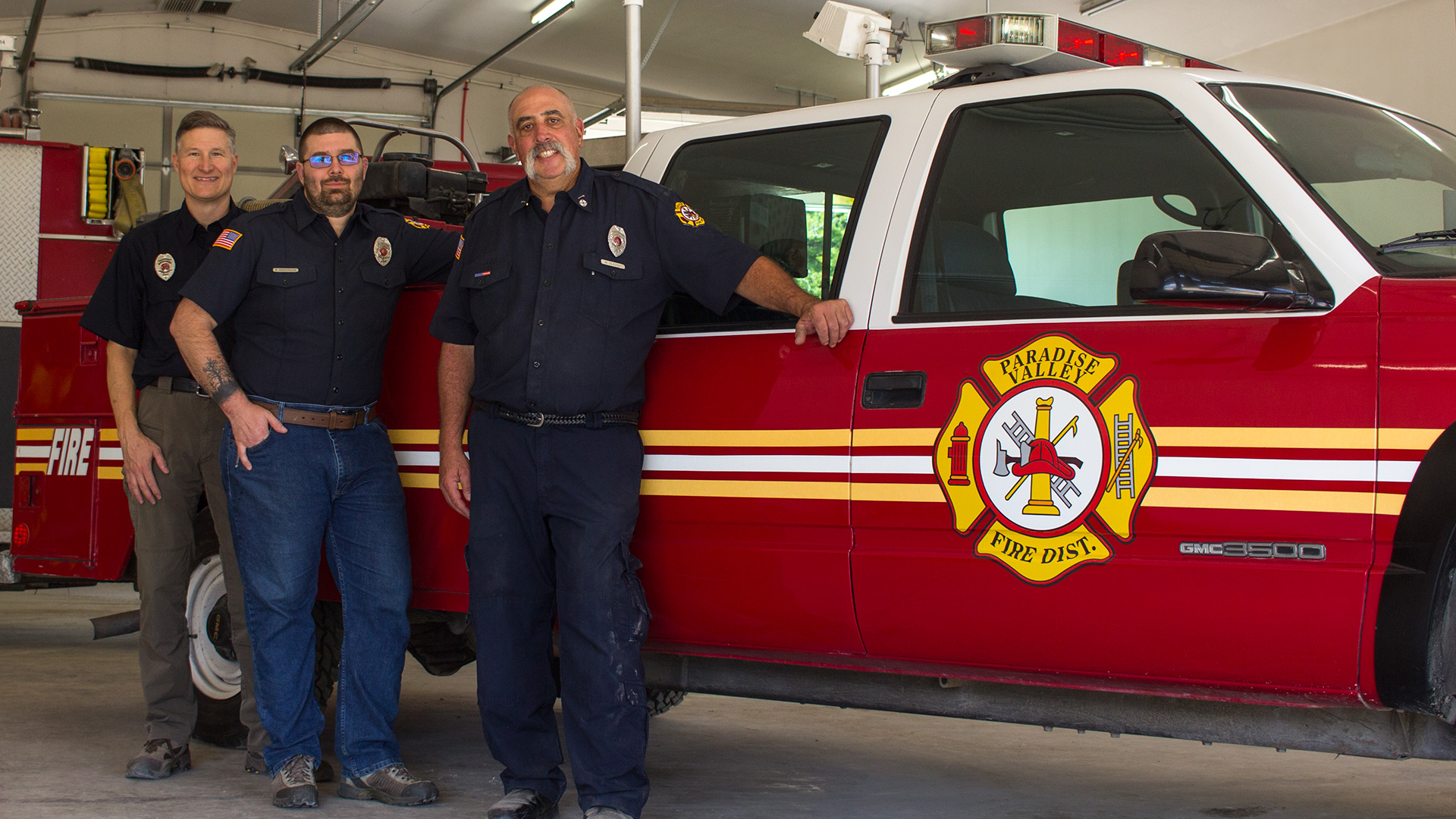 Paradise Valley Fire District (PVFD) is a 65-square-mile rural fire district consisting primarily of open wildlands and agricultural fields located southeast of the town of
Bonners Ferry, Idaho. The district currently maintains two fire stations to protect the lives and property of our 2,600 residents, who make up nearly 25% of Boundary
County’s total population.

We are staffed 100% by volunteers who live within the district or in the nearby town of Bonners Ferry. Like most firefighters, Paradise Valley’s volunteers do much more than just take down fires: they also respond to vehicle accidents, medical emergencies, rescues, hazmat incidents, downed power lines and much more. Our dedicated volunteers are the heart of our emergency response capability.

The district is divided into three sub-districts, each represented on a Board of Commissioners who are elected from within their district to represent their neighbors. The Fire Commissioners meets publicly once per month to approve expenditures.

PVFD is a sparsely populated district consisting of extensive wildland/urban interface area and is home to critical national infrastructure, including the TransCanada GTN Pipeline System that provides natural gas to California, Nevada, and the Pacific Northwest, as well as the BNSF railway which links agriculture, ranching, timber, petroleum and other industries to domestic and international markets. PVFD firefighters also protect about 12 miles of Highway 95, which acts as the primary North/South corridor between U.S. Interstate 90 and Canada, a major trucking route and primary route for summer vacationers from all over. 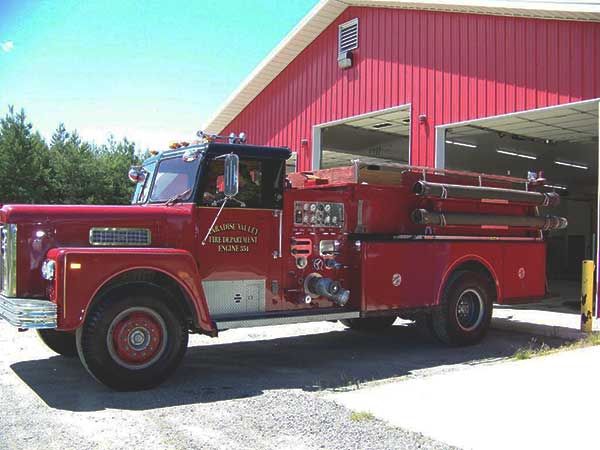 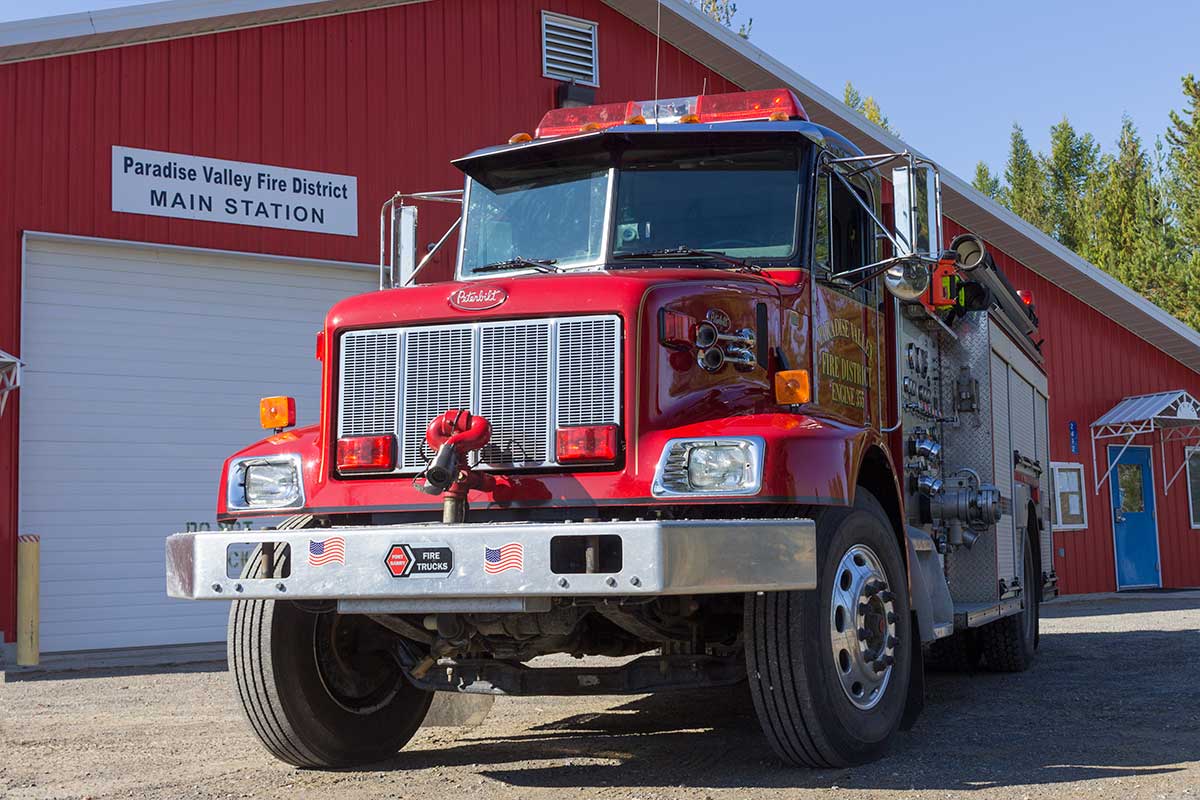 Engine 355 is the work horse of the department and is the primary response apparatus to roll out of the vehicle bay for most types of incidents. It is a 2004 Peterbilt structure engine that carries 800 gallons of water and a normal crew of two (or three in a pinch). 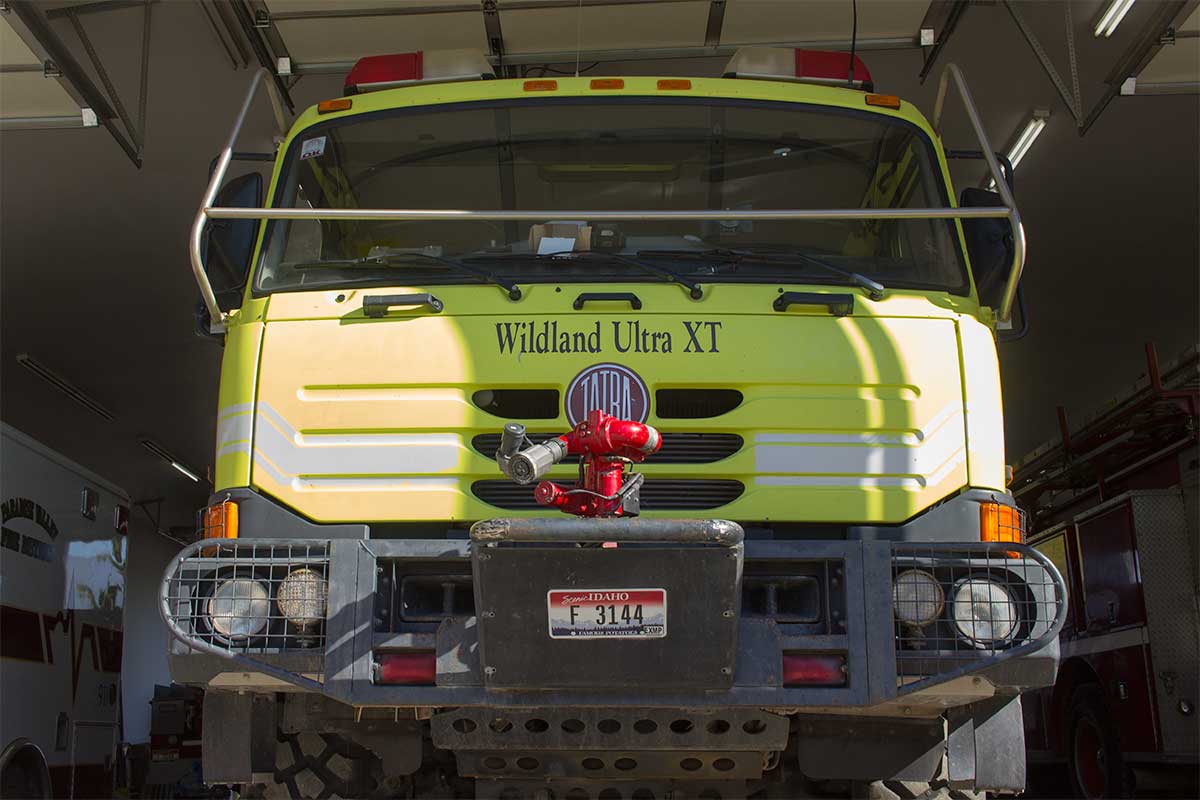 Engine 372 is a Wildland/Urban Interface (WUI) vehicle that is used to respond to wildland fires that might also be threatening structures. It is a 2007 Tatra Wildland Ultra XT with 6×6 wheel-drive and can deliver 2,250 gallons of water to the scene along with a crew of 5 firefighters. Paradise Valley firefighters affectionately refer to Engine 372 as “Betsy”.  Betsy can also be used to support structure fires by delivering an amazing amount of water to the scene. 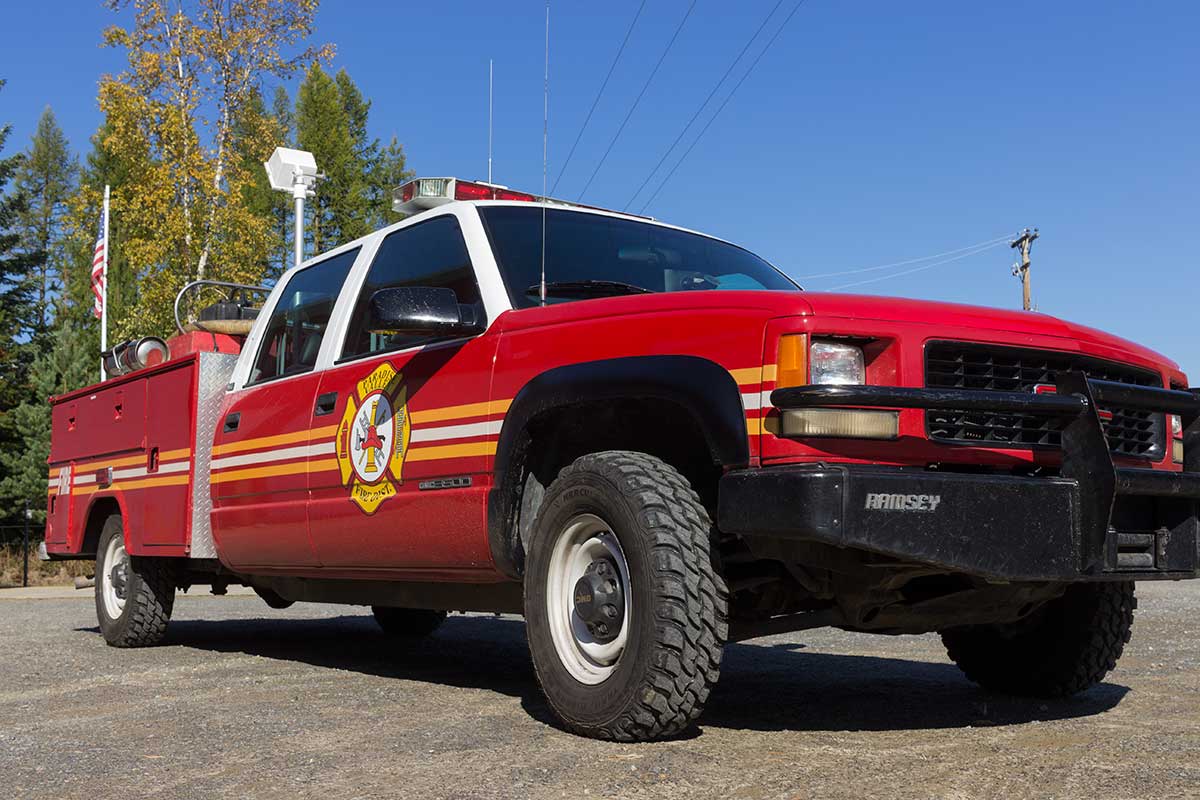 Engine 362 is a small wildland brush truck designed for light and rapid response to a wildland fire. It is a 1997 GMC 3500 4×4 wheel-drive vehicle that holds 200 gallons of water and carries a 120 gallon-per-minute Davey pump on board. 362 can deliver up to 5 fully-loaded wildland firefighters to the scene. 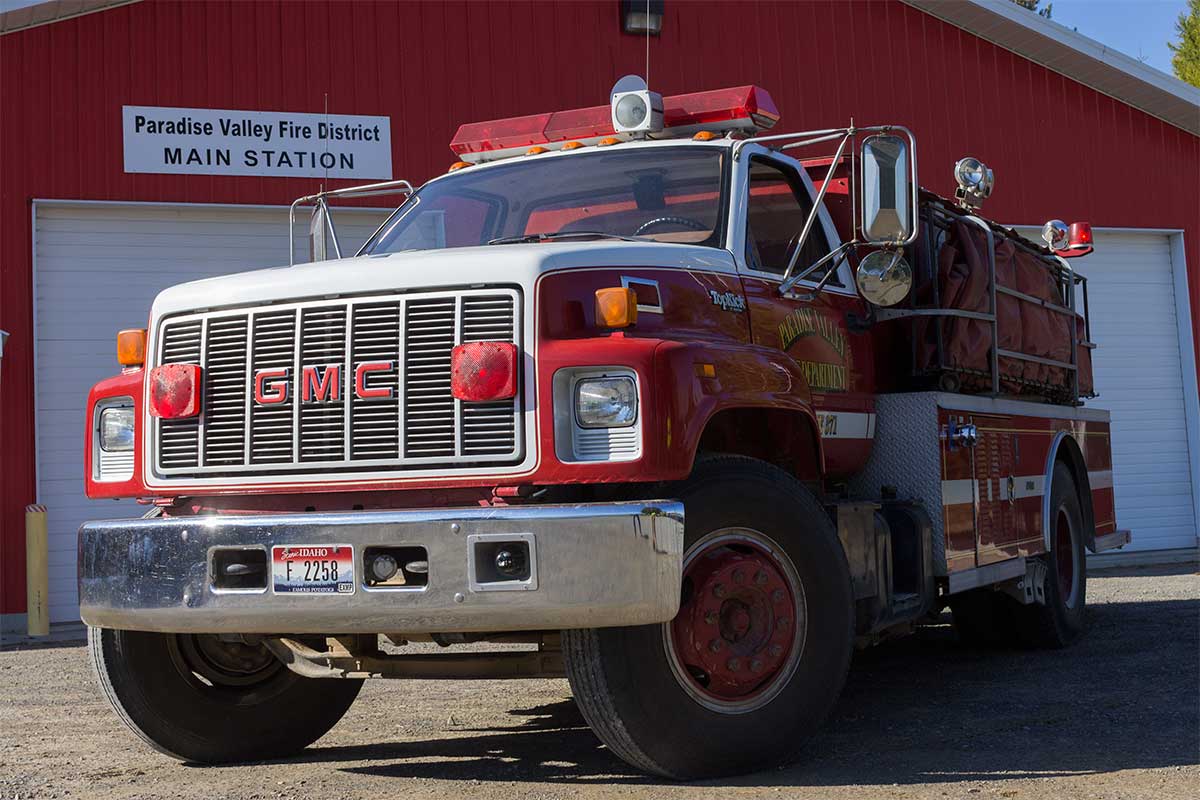 Tender 371 is an important piece of equipment for fighting a structure fire, wildland fire, vehicle fire, or any type of fire in the district. Firefighters need water and lots of it, and water tenders like 371 ensure the supply never runs out, especially in remote areas far from the nearest fire hydrant.  Tender #371 is a 1990 GMC TopKick Fireline Diesel and can carry 1500 gallons of water and two firefighters to the scene.

The Main Station also contains the Fire Chief’s office, a community room, and is the district’s main training location on Thursday evenings. 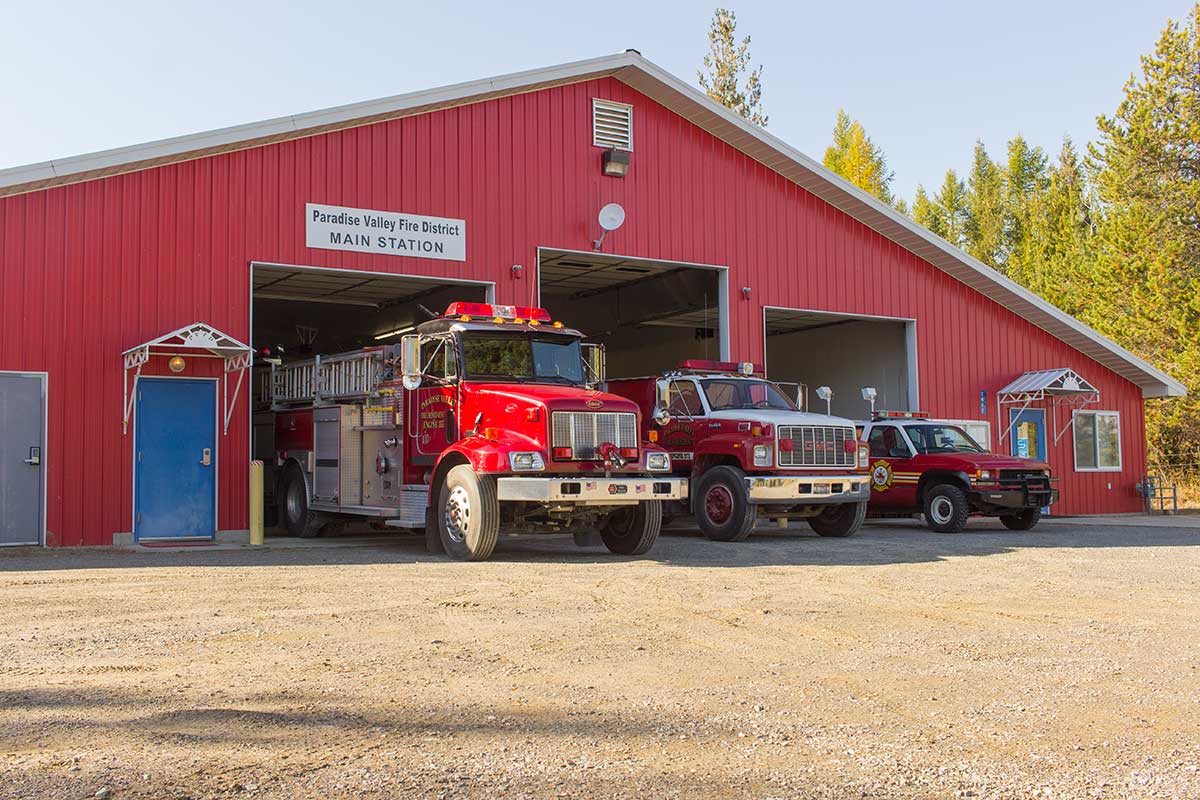 The Cow Creek Station is located at 4375 Cow Creek Road and houses three firefighting vehicles in a heated garage along with backup equipment. When Paradise Valley Fire District has enough volunteers to staff it, the location of the Cow Creek Station can enable a more rapid additional response to emergencies in the Northern and Eastern areas of the district.

or send us an email.

Paradise Valley Fire District is a volunteer fire district located southeast of the town of Bonners Ferry, Idaho. The district proudly protects the lives and property of our 2,600 residents.